Unit has not started work on this phase 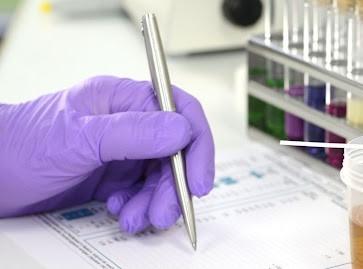 After graduation, MLS majors are employed primarily in hospital and reference laboratories and often advance quickly to management positions. Therefore, in addition to teaching students to analyze blood and body fluids, identify infectious organisms, monitor patients’ overall health and treatment, and detect disease, the program prepares them to write policies and procedures for laboratory personnel, communications concerning laboratory testing, results for patients and other health care professionals, and case studies and scientific writing for healthcare professionals.

The Medical Laboratory Sciences faculty generated the following list in response to the question, “What characterizes academic and professional communication in this discipline?”

The MLS faculty agrees that as healthcare professionals, medical laboratory scientists must be able to address a variety of audiences. For the entry‐level practitioner, most often the communications will be short and directed to another healthcare professional regarding laboratory testing that has been requested or performed. MLS graduates must also be able to effectively communicate the status of the laboratory to administrators and accrediting bodies using business letters, annual reports, and budget requests. The following writing characteristics have been identified by faculty and medical laboratory scientists as being important for successful written communication within the discipline:

The Medical Laboratory Sciences faculty generated the following list in response to the question, “With which writing abilities should students in this unit’s major(s) graduate?”

MLS faculty members have continued their efforts to define the desired writing abilities of MLS graduates. The list below is the most recent version:

Despite the wide range of written genres assigned in their courses, the MLS faculty developed the following short-listed menu of criteria from which members can adapt items suitable for their assignments:

+
Highlights from the Writing Plan

Because the MLS student population is linguistically diverse, the faculty initiated Writing Plan implementation by focusing on ways of supporting multilingual writers. A team of three language acquisition specialists analyzed a corpus of MLS undergraduate student writing (texts written by both multilingual writers and monolingual writers) for patterns of writing strength and weakness. This research found (a) that errors found in the texts contributed by multilingual writers were categorically similar to those found in the writing of native English speakers but appeared more frequently in multilingual students’ texts and (b) that some of the discourse styles and textual shorthand expected in MLS writing (for example the frequent omission of definite and indefinite articles) complicated the ability distinguish language-based errors from familiarity with discourse norms. More on this study can be found in Conway-Klaassen, J.M., Thompson, J.M., Eliason, P.A., Rojas Collins, M., Murie, R., & Spannaus-Martin, D.J. (2015). Multilingual and native English-speaking student writers in medical laboratory sciences (MLS): A comparative pilot study. Journal of the Scholarship of Teaching and Learning, 15(4), 139-160.

Currently in their third-edition Writing Plan, the MLS faculty members are working to support a vertically organized sequence of writing support within their curriculum, helping students to transfer and develop expected writing abilities as they move from course to course. The faculty also continues to focus on integrating faculty-identified grading criteria into departmental assessments and promoting the importance of writing in the field through interviews with lab professionals.

College of Continuing and Professional Studies

College of Education and Human Development

College of Science and Engineering